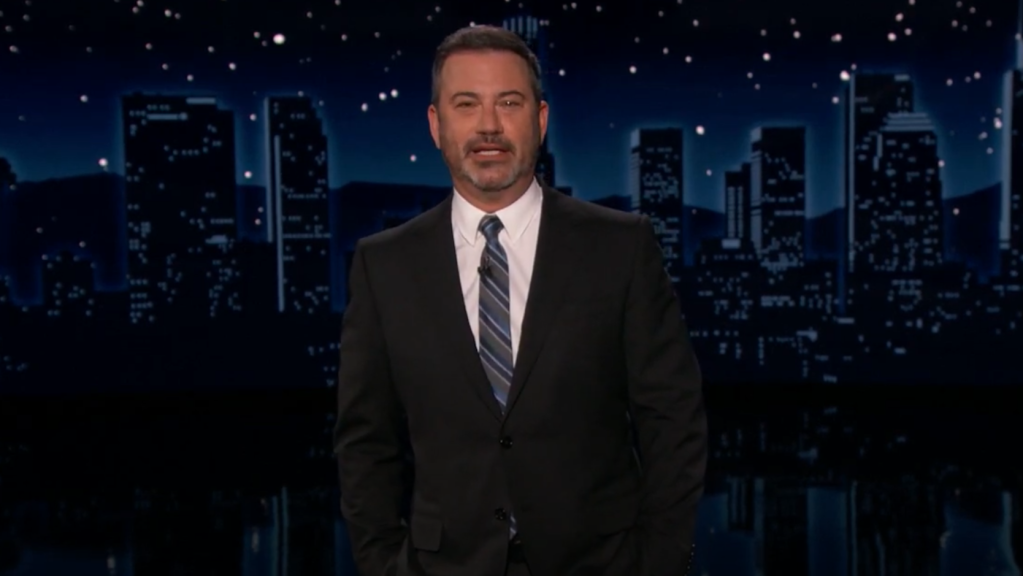 “Remember last year, when Trump promised the coronavirus would disappear by Easter?” he joked. “That was a good one.”

Kimmel then turned to current events, picking up with the former president’s latest bit of mischief. “At Mar-a-Lago today, Donald Trump played a very cruel prank on his son, Eric,” he said. “He opened his arms and pretended like he was going to hug him.”

Subsequently, the host returned to Covid talk, noting that “old lipstick on a pitbull” Sarah Palin has contracted the coronavirus, along with two of her children. “How, she doesn’t know,” he said. “Sarah Palin lives in Alaska. You almost have to try to catch Covid in Alaska. It’s easier to catch a bald eagle.”

In his opening monologue, Kimmel noted that the former Alaska governor and vice presidential candidate is now encouraging others to wear masks, to prevent the spread of Covid-19. This “is rich,” he said, because toward the beginning of the U.S. outbreak, Palin had traveled “all the way to Texas” to visit a beauty salon. The reason for her visit, he recalled, was to support the owner of that salon, who went to jail for refusing to shut her business down.

“But now that Sarah has herself been bitten by the bug, she changed her tune. I love these people who only believe in science when it happens to them,” he said. “But good for her for speaking out, finally.”

Later on, Kimmel warned that the coronavirus isn’t the only transmittable disease that we have to fear, at the moment. “Oxford University is said to be hard at work on a vaccine for what they call ‘Super Gonorrhea,’” he explained. “Back in 2018, a British man who was vacationing in Southeast Asia contracted what has been described as the worst-ever case of gonorrhea.”

“God only knows how he got that gonorrhea, but he did, and now it’s spreading.” he added. “The hope is that a vaccine to stop it will be ready in time for next season of Bachelor in Paradise, so keep your fingers crossed.”

To view Kimmel’s remarks in full, click on the video above.

How TikTok Remade the Runway
Connie Britton Weighs in on a White Lotus Season 3 Return
Beloved British TV Presenter Jill Dando’s Life & Death To Be Profiled In Netflix Doc Series
U.S. Senate Holds Hearing on Ticketmaster Operations: “The Solutions Are There for the Taking”
Knock at the Cabin Featurette – Opportunity of a Lifetime (2023)