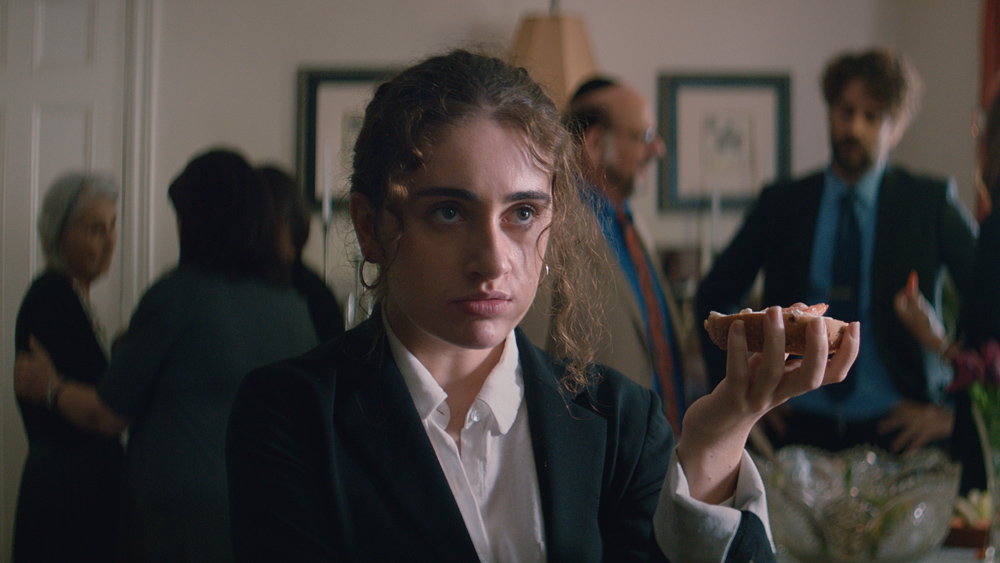 Writer-director Emma Seligman brings her feature Shiva Baby to theaters and TVOD starting today — and it is quite a comedic ride.

Released by Utopia, Shiva Baby follows a young woman who is trying to keep the different versions of herself in order when she runs into her sugar daddy and her ex-girlfriend at a shiva with her parents.

Let’s elaborate on all of that.

Danielle (Rachel Sennott) is a college student on the verge of graduation. She has a sugar daddy Max (Danny Deferrari) that pays her on a regular basis. One day, after rushing from her sugar daddy to her neurotic parents’ family shiva, she is given the third degree by various estranged relatives about her appearance and lack of post-grad plans. Meanwhile, her ex-girlfriend, Maya (Molly Gordon) is getting all the praise because she got into law school.

Things take even more of a turn when her sugar daddy shows up with his accomplished wife, Kim (Diana Agron) and their baby.

As a result, Danielle begins to struggle as she juggles her different personas and her insecurities. Hilarity ensues.

Shiva Baby, which also stars Polly Draper and Fred Melamed, was based on Seligman’s 2018 short film of the same name. It made its premiere at SXSW in 2020 and played at the Toronto International Film Festival.

Every Breath You Take — not to be confused with the iconic song by The Police — is a psychological thriller that follows a psychiatrist (Casey Affleck), whose career is thrown into jeopardy when his patient takes her own life. When he invites his patient’s surviving brother (Sam Claflin) into his home to meet his wife (Michelle Monaghan) and daughter, his family life is suddenly torn apart.

The film is directed by Vaughn Stein and written by David K. Murray and also features Veronica Ferres, India Eisley.

Vertical Entertainment releases the film in select theaters and on VOD today.

Inspired by the novel “Ghetto Cowboy” by G. Neri and adapted by Staub and Dan Walser, Concrete Cowboy made its premiere at the Toronto International Film Festival in 2020. The story follows 15-year-old Cole (Caleb McLaughlin) who is expelled from school in Detroit and is sent to North Philadelphia to live with Harp (Idris Elba), his estranged father.

Harp leads an interesting life. For one, a horse lives in his apartment — but this is what he finds solace in. He rehabilitates horses for inner-city cowboys at the Fletcher Street Stables, a real-life black urban horsemanship community that has provided a safe haven for the neighborhood residents for more than 100 years.

Torn between his growing respect for his father’s community and his reemerging friendship with troubled cousin Smush (Jharrel Jerome), Cole begins to reprioritize his life as the stables themselves are threatened by encroaching gentrification.

Oscar-nominated Best International Feature The Man Who Sold His Skin from writer-director Kaouther Ben Hania is set to open in theaters in New York today before rolling out to Los Angeles and additional select cities on April 9.

The film tells the story of Sam Ali, a young sensitive and impulsive Syrian, left his country for Lebanon to escape the war. To be able to travel to Europe and live with the love of his life, he accepts to have his back tattooed by one of by the world’s most sulfurous contemporary artist. Turning his own body into a prestigious piece of art, Sam will however come to realize that his decision might actually mean anything but freedom.

The film also stars Yahya Mahyni, Dea Liane, Koen De Bouw and Monica Bellucci. It should be noted that Ben Hania makes history as the first Muslim woman to be nominated in the Oscar category of Best International Feature.

Hitting digital platforms today is The Believer, a horror-thriller written and directed by Shan Serafin and stars Sophie Kargman, Aidan Bristow, and Billy Zane. (This film is not to be confused with the pre-The Notebook Ryan Gosling 2001 indie feature directed by Henry Bean.)

The story follows Lucas (Bristow) is an out-of-work nuclear scientist who struggles with tension in his marriage after his wife Violet (Kargman) mysteriously terminates her pregnancy without his consent. As Lucas’ physical health begins to inexplicably deteriorate, Violet’s behavior grows increasingly bizarre and he seeks clarity from his therapist Dr. Benedict (Zane).

As Lucas becomes exhausted by his job search,  strange events begin to occur in the home and his medical condition progressively declines. Benedict recommends they try an alternative therapy, but it only makes matters worse. Lucas questions Benedict’s effectiveness as his grip on reality begins to fade. Violet’s deceitful behavior arouses his ever-deepening suspicions, and after a visit from two mysterious guests, her insidious behavior becomes disturbingly pervasive. Lucas’ anger and frustration turns to fear as Violet’s sinister intentions are revealed. Lucas tries in vain to escape the evil web she has spun, but by the time he discovers the truth, it might be too late.

Grear Patterson’s sports drama Giants Being Lonely at Gravitas Ventures is set to launch on cable and VOD on April 6.

The pic made its premiere at the Venice Film Festival and follows Bobby (Jack Irving), the star pitcher on his high-school baseball team. He is a motherless dreamer whose alcoholic father loves him but remains distant and aloof. His teammate Adam (Ben Irving) is the coach’s son, prone to violent reproaches at home with little support from his emotionally distant mother.

Caught in between them is Caroline (Lily Gavin), a high school beauty from a seemingly perfect home who loves both golden boys, and just wants to go to prom. Set in a semi-rural landscape of verdant forests and pent-up yearning, the debut feature from lauded mixed-media artist Grear Patterson is a deeply personal story of youth and young manhood, tracing the ups and downs of love, sex, loneliness, friendship, baseball, and death – as the pressure mounts to make it out alive.

‘The Phantom Of The Opera’ Tops Broadway Box Office; ‘The Piano Lesson’ Closes On High Note
Channel 4: Inside The Doomed Sale Of A Crown Jewel Of British Television
Spring 2023 Is All About Standing Out
‘So Help Me Todd’ Renewed For Season 2 On CBS
Watch Top Gun: Maverick’s Miles Teller Dance With His Dog (Sadly Not Shirtless) For A Super Bowl Commercial