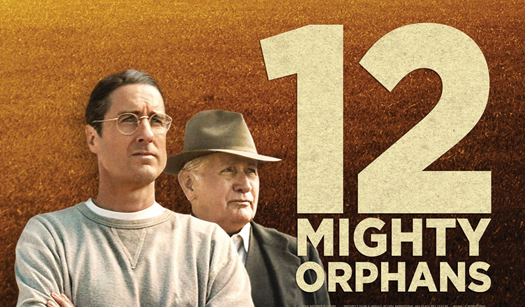 Sony Pictures Classics will open Ty Roberts’ 12 Mighty Orphans on June 11 in New York and Texas with a wider expansion on June 18.

12 Mighty Orphans tells the true story of the Mighty Mites, the football team of a Fort Worth orphanage who during the Great Depression went from playing without shoes—or even a football—to playing for the Texas state championships. Over the course of their winning season the underdogs and their resilient spirit became an inspiration to their city, state, and an entire nation in need of a rebound, even catching the attention of President Franklin D. Roosevelt. The architect of their success was Rusty Russell (Luke Wilson), a legendary high school coach who shocked his colleagues by giving up a privileged position so he could teach and coach at an orphanage. Few knew Rusty’s secret: that he himself was an orphan. Recognizing that his scrawny players couldn’t beat the other teams with brawn, Rusty developed innovative strategies that would come to define modern football.

Sony Pictures’ Classics is nominated for six Oscars this year for The Father including Best Picture. The pic has grossed $1.4M during the pandemic as theaters are rebounding.

The TikTok-Viral UGG Minis That Hailey Bieber’s Obsessed With Are Back in Stock
Lululemon Belt Bag Restock: Shop Before They Sell Out… Again
Morgan Evans Has a Relatable Outlook After Kelsea Ballerini Break Up
8 New Albums You Should Listen to Now: Young Fathers, the Men, Raye, and More
2023 Grammys: See Exes Taylor Swift and Harry Styles Reunite