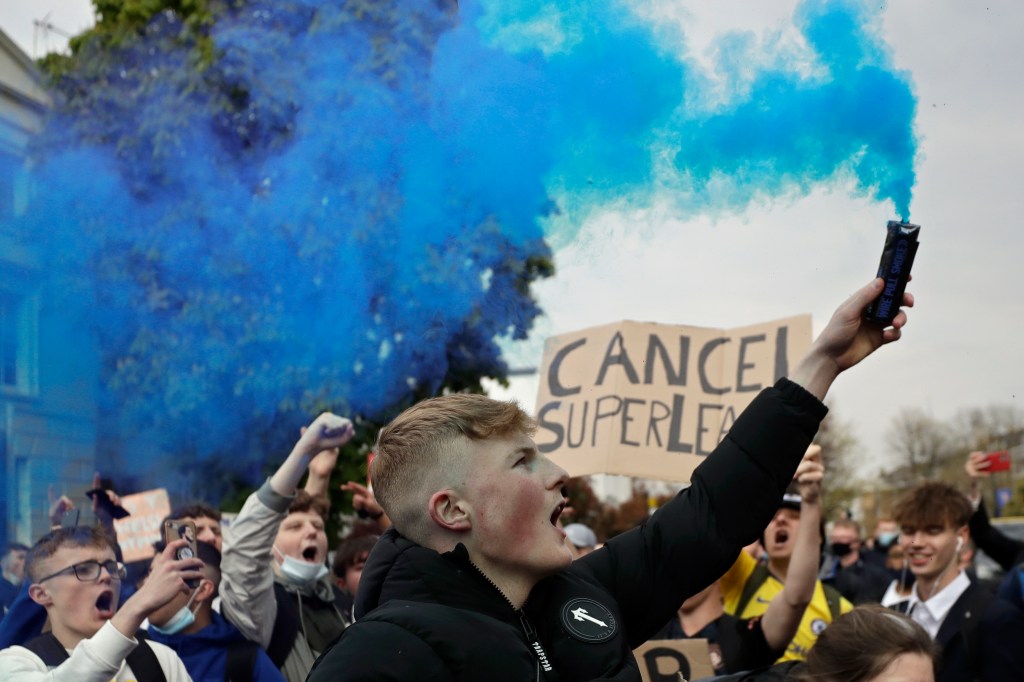 UPDATED, 7:35 PM: The announced European Super League appears to be crumbling. By late today, all six of the English Premier League clubs involved in the widely panned venture — Arsenal, Manchester United, Manchester City, Tottenham, Liverpool and Chelsea — had pulled out. See their tweets and/or statements below.

In a statement (read it below), the league said it is “convinced our proposal is fully aligned with European law and regulations” and that it “shall reconsider the most appropriate steps to reshape the project.”

The six clubs remaining in the fold — for now — are Italy’s AC Milan, Inter Milan and Juventus, and Spain’s Barcelona, Real Madrid and Atletico Madrid.

As for the English sides, Chelsea and Man City begged off earlier in the day, with the others following suit later.

Arsenal went so far as to tweet, “We made a mistake, and we apologise for it.”

Here is the league issued this statement tonight, followed by the English teams’ tweets and background on the league and the most recent developments:

The European Super League is convinced that the current status quo of European football needs to change.

We are proposing a new European competition because the existing system does not work. Our proposal is aimed at allowing the sport to evolve while generating resources and stability for the full football pyramid, including helping to overcome the financial difficulties experienced by the entire football community as a result of the pandemic. It would also provide materially enhanced solidarity payments to all football stakeholders.

Despite the announced departure of the English clubs, forced to take such decisions due the pressure out on them, we are convinced our proposal is fully aligned with European law and regulations as was demonstrated today by a court decision to protect the Super League from third party actions.

Given the current circumstances, we shall reconsider the most appropriate steps to reshape the project, always having in mind our goals of offering fans the best experience possible while enhancing solidarity payments for the entire football community.

As for the English sides, Chelsea and Man City begged off earlier in the day, with the others following suit later.

Arsenal went so far as to tweet, “We made a mistake, and we apologise for it.”

As a result of listening to you and the wider football community over recent days we are withdrawing from the proposed Super League.

We made a mistake, and we apologise for it.

We will not be participating in the European Super League.#MUFC

Liverpool Football Club can confirm that our involvement in proposed plans to form a European Super League has been discontinued.

We can confirm that we have formally commenced procedures to withdraw from the group developing proposals for a European Super League (ESL).#THFC ⚪️ #COYS

Manchester City have withdrawn from the 12-team coalition and Chelsea are preparing to do so. Rumours are widespread tonight that others will soon follow.

In a move the club claim is not related to the Super League fiasco, Manchester United announced that executive vice chairman Ed Woodward will step down from his role at the end of the year. The timing is certainly curious.

The backlash against the Super League and the 12 breakaway clubs has been ferocious and almost universal.

Around 1,000 fans gathered outside Chelsea’s Stamford Bridge ground tonight to protest their club’s involvement. Meanwhile, Liverpool captain Jordan Henderson said on social media tonight that his side’s “collective position” is they do not want the Super League to take place. Other leading players have added their voices to the dissent and Liverpool and Manchester City’s managers have also expressed dissatisfaction.

UK Prime Minister Boris Johnson said Manchester City and Chelsea have made “absolutely the right” decision and he hopes others “will follow their lead”.

There has been no official word yet from ringleaders Real Madrid, Manchester United and Juventus but many European sports journalists are predicting that the end is nigh.

Multiple broadcasters have distanced themselves from the League since it was announced Sunday night without any consultation with fans or players. European front and back pages have been dominated by the story of remarkable corporate arrogance and greed.