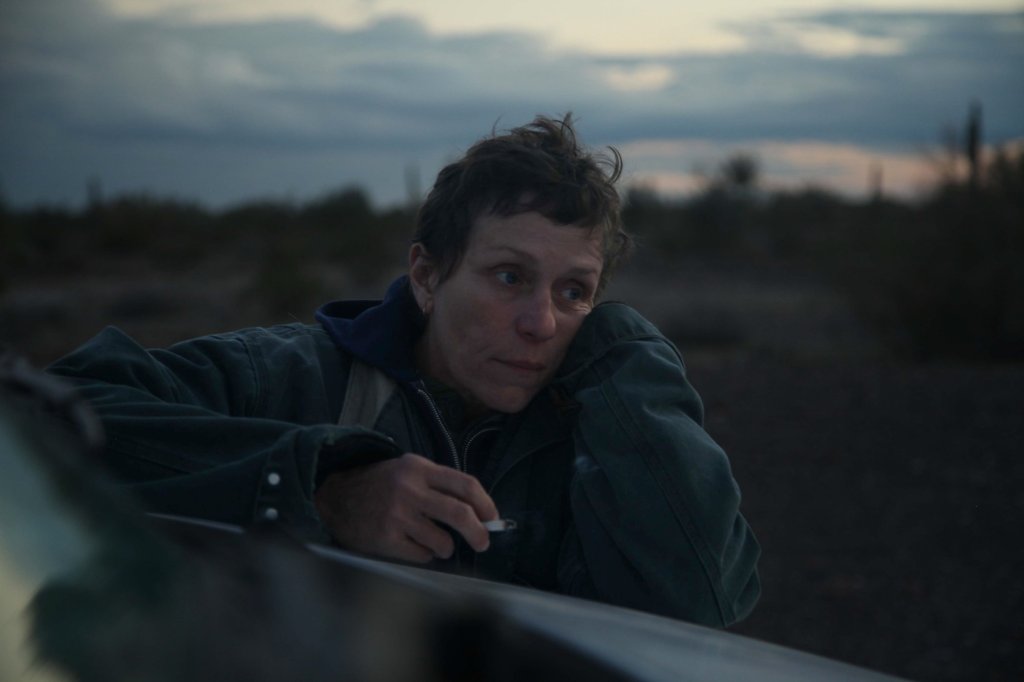 No matter which film takes home Best Picture Sunday night, that title will be the lowest grossing ever in Oscar history.

According to Comscore, Kathryn Bigelow’s 2009 title The Hurt Locker stands as the lowest-grossing Best Picture Oscar winner at the domestic B.O. with $17M. That title will likely be upset this Sunday by Chloé Zhao’s Nomadland, which Searchlight didn’t report grosses on during its run, but industry estimates figure has grossed around $2.5M. An Oscar Best Picture win could easily push Nomadland to $3M.

Even if the Best Picture voting math throws Nomadland off from the big prize, the other noms have also posted small results as well, and will rank as the lowest grossing Best Picture Oscar winner of all-time, including Focus Features’ Promising Young Woman ($6.4M), Warner Bros.’ Judas and the Black Messiah ($5.4M), A24’s Minari ($2.57M) and Sony Pictures Classics’ The Father ($1.6M). While Netflix gives their titles a short theatrical window before hitting the service, i.e. Mank and The Trial of the Chicago 7 and Amazon as well with Sound of Metal, sources tell us that those movies haven’t reached great B.O. levels either. Those streamers spend largely to launch those titles on their services, and aren’t focused on churning turnstiles. If the grosses were anything to scream about, well, then Netflix and Amazon wouldn’t be hiding them.

Obviously, the low B.O. wattage of this year’s Best Picture nominees is squarely due to the broken exhibition structure of the pandemic, read there are arthouses which still haven’t opened (i.e. the notable Jacob Burns Center in Pleasantville, NY) or are sheer collateral damage of the Covid recession (i.e. Landmark’s NYC 57 West, San Diego Ken and Ritz at the Bourse in Philly). Nonetheless, all of this raises even more concerns about how awards contenders will be handled at the domestic B.O. heading into future awards seasons. The news this week about arthouse cinema champs and Searchlight Bosses Nancy Utley and Steve Gilula retiring  from streaming-obsessed Disney prior to Oscar night also gave many pause about the future of auteur big screen fare. More on that further down.

Box office can either be a blessing or a curse for awards season contenders. When it’s robust, box office and awards go hand-in-hand. Great launches out of NYC and LA translate into potential crossover results with mainstream audiences, and indeed, raise a contender’s profile above the competitive noise. But when a contender’s B.O. tanks, it can more often than not spoil its award season prospects.

At 107 minutes, Nomadland is a slow burn. However, it’s interesting that Searchlight opted not to report grosses as the pic and Zhao racked up an enormous groundswell of top prizes at the Golden Globes, PGAs, DGAs, BAFTAs, and Independent Spirits. Each distributor is taking their own way during the pandemic, especially indie ones with many arthouses still closed and NYC auditorium capacities capped. In the current depressed marketplace, and with the title’s availability on Hulu, there weren’t any box office victory laps for Nomadland to take, hence the reason why Searchlight stayed quiet about the pic’s results. Similar to Netflix with Mank and Chicago 7, and Amazon with Sound of Metal, Searchlight decided to let Nomadland compete on its face-value aesthetic this awards season rather than propping the pic’s commercialism (which if you think about it, jibes with Nomadland‘s sensibility about Americans who’ve chosen to live on the fringe of society).

But, is the future for these awards season contenders, which can sometimes be risky business ventures, one of minimal, unreported box office results? Does the non-reporting of figures, brighten the chances for Oscar gold?

There was a rumor among rival studios before Utley and Gilula announced their retirement that Searchlight was poised to throw their future theatrical slate day and date on Hulu with cinemas, much like Warner Bros. HBO Max theatrical strategy. I’ve learned that’s largely false. The newly owned Disney indie label looks to remain a home where auteurs can make their wares for the big screen. It’s why filmmakers like Sam Mendes, Taika Waititi, Guillermo del Toro, Terrence Malick, Yorgos Lanthimos, etc. make their movies at Searchlight and not at streamers.

Outgoing Disney chairman Bob Iger told the New York Times this week “No, not at all” regarding a pivot in direction for Searchlight post Utley and Gilula.

“We haven’t been particularly vocal about this, but we intend for Searchlight to play a big part in supplying content, not just for theaters but for our streaming platforms. We are going to invest more and more. Expect more output rather than less,” said Iger.

Utley added to the New York Times, “I think the transition to Disney has gone really smoothly, which is one reason I have all the faith in the world about the future of Searchlight.”

While the non-reporting of awards contenders’ B.O. from a truncated theatrical-to streaming release was already in place pre-pandemic with Netflix and Amazon, it would not be out of the norm for that to occur with major studios taking advantage of their streaming services on a case by case basis where B.O. is just too much of a risk. In those instances where testing and tracking diagnostics indicate a possible crossover hit, then, of course, a pure theatrical release will be executed on such titles. Searchlight has not announced a date yet for Wes Anderson’s The French Dispatch. The pic, which is Anderson’s first live-action movie since 2014’s The Grand Budapest, is poised to be a global hit much like his 4x Oscar winner which repped a B.O. record for the filmmaker at $173M WW.

NYC and LA’s reopening in time for Oscar nominations on March 15 has surely helped this year’s Best Pic contenders, but while those nominees in release saw percent increases since then, the dollars were small. Since Oscar nom day, The Father‘s total running B.O. is +310%, Minari is +145%, Nomadland is +25%, Promising Young Woman is +16%, and Judas and the Black Messiah +15%.

Marketing campaigns for this year’s Best Picture nominees were thrifty.  Of the data observed by iSpot which tracks TV ad spending, Focus shelled out an estimated $6.3M since Dec. 7 on spots for Promising Young Woman yielding 752.4M impressions across such channels as AMC, HGTV, Investigation Discovery, Lifetime and A&E. Warner Bros. has spent close to the same as Focus for a similar amount of eyeballs on their combined theatrical-HBO Max push for Judas and the Black Messiah, running ads on NBA Baskeball, 9-1-1, Good Morning America, Today and ABC World News Tonight With David Muir. Netflix has spent close to $5M on TV spots for The Trial of the Chicago 7 since Sept. 13, which triggered close to 43M impressions, across NBC, CNN, MSNBC, and CBS.

Promising Young Woman, Minari, The Father have had shortened theatrical windows before becoming available simultaneously on PVOD. Judas and the Black Messiah went day and date in theaters on HBO Max. As opposed to Netflix and Amazon, the Burbank, CA studio actually spends to drive people to cinemas and saw Judas collect six Oscar nominations and a $2.07M opening in second place during the weekend of Feb. 12-14.

Nomadland‘s momentum in the Oscar race kicked off by being the first title out there with a Telluride Film Festival sponsored drive-in premiere at the Rose Bowl in Pasadena, CA on Sept. 11 timed to the movie’s Venice Film Festival and TIFF debuts. Nomadland promptly won the Golden Lion and two awards for Zhao at Venice, the SIGNIS and Fair Play. Searchlight proceeded with a plan of making the film available early to voters to watch and hit every virtual film festival imaginable. The pic’s Dec. 4 release date was changed to Jan. 29 with an exclusive Imax run for two weeks before it broke wider at 1,175 theaters and dropped on Hulu on Feb. 19. The pic did pretty good on Imax, which repped over 9% of the pic’s total B.O. Nomadland, from what I hear, did its best business in upscale theaters in Phoenix, Salt Lake City, Denver, Dallas, and Los Angeles. The pic had a big swath of theaters during NYC’s first weekend back at the B.O., March 5-7, with Williamsburg Cinemas and the Nitehawk in Brooklyn faring well with their capacity limits. While Hulu has exclaimed anecdotally viewing records for its movies The Happiest Season and The United States vs. Billie Holiday, they haven’t reported any numbers or exclamations about Nomadland.

On the upside, should Judas and the Black Messiah, Minari or Nomadland win tomorrow, a 1,000 break theatrical re-release is certainly in store.

The theatrical business is showing great signs of rebounding from Covid’s recession, especially this weekend with the face-off of Demon Slayer and Mortal Kombat set to gross $20M apiece. But that’s for big event titles aimed at 18-34 year olds. With continued worrisome from the core 55+ demographic over the pandemic, NYC seating limits and the current closure of LA’s Arclight Cinemas and Cinerama Dome, the arthouse side of the business will unfortunately be slower to return.

‘You People’ Debuts At No. 1 On Netflix Top 10 Film List; ‘Ginny & Georgia’ Still Reigns Supreme For TV
The TikTok-Viral UGG Minis That Hailey Bieber’s Obsessed With Are Back in Stock
M. Night Shyamalan’s ‘Knock At The Cabin’ To Knock ‘Avatar 2’ Out Of No. 1 Spot – Box Office Preview
Where Olivia Wilde Reportedly Stands With Ex Jason Sudeikis Following Custody Drama And Breakup With Harry Styles
‘The Phantom Of The Opera’ Tops Broadway Box Office; ‘The Piano Lesson’ Closes On High Note