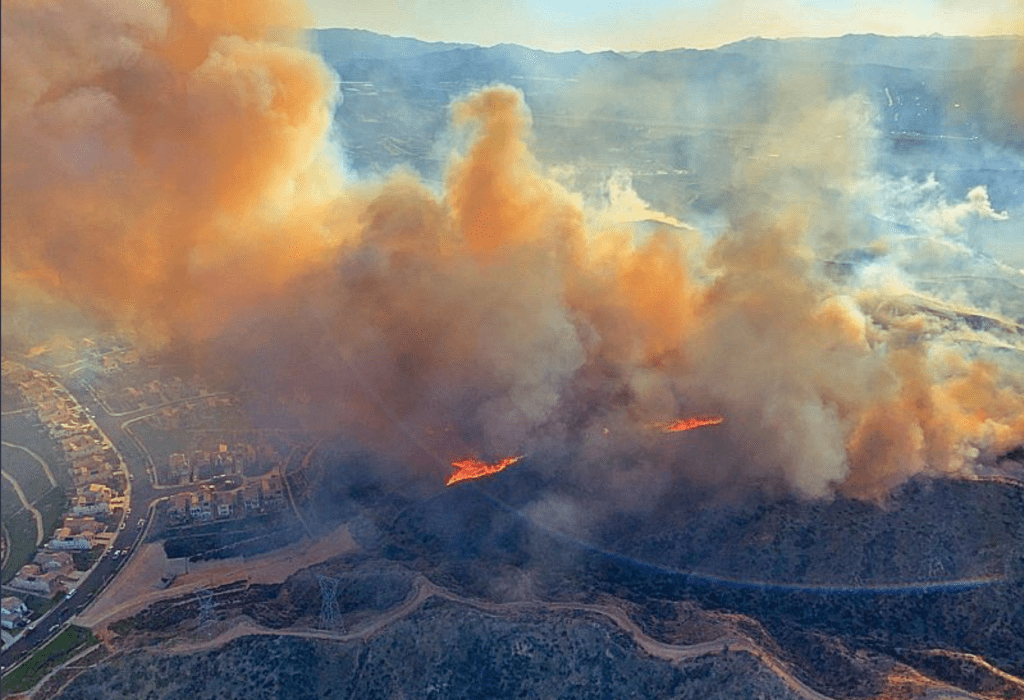 A brush fire erupted today about 30 miles north of Los Angeles in Santa Clarita. By 8 p.m., the blaze had scorched about 650 acres and continued to burn unchecked, prompting evacuations.

The North Fire was reported at about 1:45 p.m. in the area of 29330 The Old Road, east of the Golden State (5) Freeway and just north of Magic Mountain, according to the Los Angeles County Fire Department.

Fire crews at the scene reported that they slowed their response to the fire due to its proximity of a Los Angeles County Sheriff’s Department explosives-disposal site in the area. (Coincidentally, that’s also the area where an explosion involving film and TV pyrotechnics injured three people and sparked a small brush fire in February.)

By 8 p.m. on Wednesday, the North Fire had exploded to 650 acres and was threatening homes.

Ash and water fall on an apartment complex on the 24000 block of Copper Hill Drive. #NorthFire Video by @emalvarenga10 pic.twitter.com/4t0iZrvqZG

Santa Clarita is home to a number of movie ranches. The North Fire seemed to be moving toward one well-known property, The Blue Cloud Ranch, where CBS’s Seal Team has reportedly filmed. Luckily shooting on the show has wrapped.

Frank Gardner, who manages the Blue Cloud Ranch, told Deadline on Wednesday evening that the fire seemed to be about 5-7 miles west of the property as the crow flies. From his vantage Gardner says, “It looks like it’s moving South, so we should be ok.”

Sounding like someone who’d been through this before, Gardner said the ranch has standard procedures in place for such situations. “We always move our water trucks around. We have four of them that we pre-position.”

“I’m more concerned with the residents of Santa Clarita and the firefighters,” he said. “My heart goes out to them.”

Residents who are evacuating and need assistance finding lodging should contact @RedCrossLA directly. Castaic Animal Shelter is taking all animals that are being evacuated. https://t.co/xxdkJBaBJu

After a record wildfire season in 2020, Governor Gavin Newsom announced recently that the state, headed toward a second year of drought with the Southern Sierra snowpack at only 15% of normal for this time of year, has already seen more fires to date than it did last year.