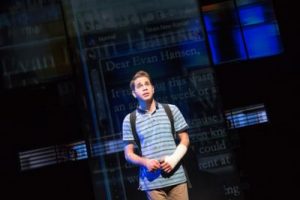 The Tony Award-winning Dear Evan Hansen will return to Broadway’s Music Box Theatre on December 11, five years after its original opening and 21 months after it, along with all other Broadway productions, shut down due to the Covid pandemic.

The return was announced by producer producer Stacey Mindich, who also said that two other productions of the musical – a North American tour and at the Noël Coward Theatre in London –  also will resume performances this Fall. The London staging returns October 26, and the tour relaunches on December 7 in Greensboro, North Carolina before visiting more than 30 cities across the US and Canada.

“It’s a remarkable feeling to put plans in place to relaunch all three Dear Evan Hansen companies, though we, like everyone in the theater industry, are facing considerable challenges,” Mindich said in a statement. “We will proceed safely and smartly to ensure a safe and equitable workplace for everyone when we return, and protect our cast, crew and audiences amidst a world forever changed and continuously evolving due to both the global pandemic and the cultural and racial reckoning. We hope that Dear Evan Hansen’s message of human connection and acceptance will feel more vital than ever.”

Tickets are now on sale for the Broadway and touring productions of Dear Evan Hansen, and tickets for the West End production will go on sale to the public on May 18.

Casting was not announced.

Mindich said that all three productions will hold a special night in their first weeks of performances to honor mental health care workers and volunteers, who will be invited to attend as guests.

“Mental well-being has become a core part of our show’s narrative over the years, and we hear from so many audience members about how the show has helped them on their own journeys to mental wellness,” Mindich said. “We have had long-standing relationships with some of this country’s and the United Kingdom’s mental health not-for-profits and we want to honor the mental health care workers and volunteers who have worked tirelessly through these trying times.”

The story follows Evan Hansen, a high schooler with social anxiety who unintentionally gets caught up in a lie after the family of a classmate who died by suicide mistakes one of Hansen’s letters for their son’s suicide note. A movie adaptation of the musical is expected to hit theaters on September 24, Universal Pictures said recently, with Ben Platt in his Tony-winning title role alongside Amy Adams, Julianne Moore, Kaitlyn Dever, Amandla Stenberg, Colton Ryan, Nik Dodani, DeMarius Copes and Danny Pino.