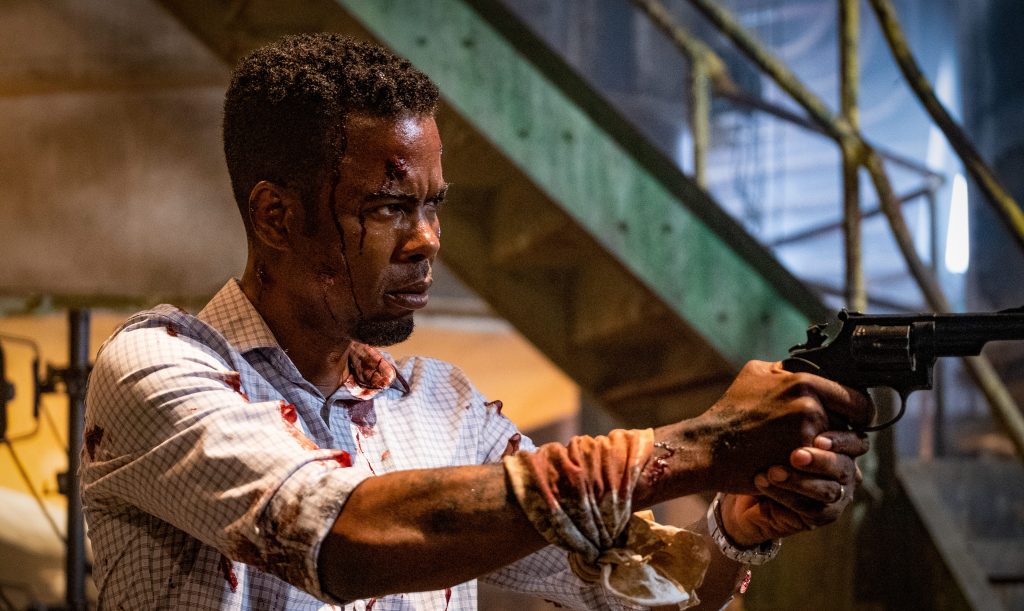 SATURDAY AM UPDATE: If you remember going back to last August, before Tenet‘s intentions to restart the box office, there were a few targeted demo movies leading up to that film’s release, i.e. Solstice Studios’ Unhinged and Disney/20th’s New Mutants. Those movies were expected to grease the wheels before a tentpole opening. True, that big B.O. debut never happened for Tenet due to New York and LA’s closure at the time, but the point is that there’s an appetizer runway of films now on the marquee as we head into Memorial Day weekend, which is 13 days from now; that 4-day holiday frame predicted to be the official start of the summer B.O. season.

Like United Artists Releasing/Miramax/MGM’s Wrath of Man last weekend, Lionsgate’s Spiral: From The Book of Saw is another opening act for the summer prior to May 28’s arrival of Paramount’s A Quiet Place Part II and Disney’s Cruella. The Chris Rock-Samuel L. Jackson R-rated horror movie took in an estimated $3.7M on Friday, including $750K previews from Thursday night, for an expected 3-day of $9.16M at 2,811 theaters. The figure falls under the estimate many were buzzing about, which was $10M-$15M. But note there’s a lot of other things going on right now in the marketplace. For the box office logs, it’s the 6th No. 1 opening for a Saw movie.

Estimates for other new fare such as Netflix’s Zack Snyder 7-day theatrical window zombie title Army of the Dead are also slightly off from what the industry was expecting. Army of the Dead, received by critics with a warm 74% positive and a great 83% positive from Comscore/Screen Engine PostTrak audiences, is playing at 600 theaters and estimated to have clocked per industry estimates $290K yesterday and $735K for the 3-day. The pic’s theater count is largely loaded by Cinemark locations, which I hear rep around 40%. Word heading into the weekend were that presales could tip this Snyder title over $1M for 3-days.  By all unofficial records, Army of the Dead is the biggest theatrical opening for a Netflix movie. The streamer’s multi-Oscar winner Roma posted an estimated $200K over the 5-day 2018 Thanksgiving frame.

Those Who Wish Me Dead was for all intents and purposes an HBO Max play unlike the event opening weekend pushes of Warner Bros/Legendary’s Godzilla vs. Kong ($31.6M) and New Line’s Mortal Kombat ($23.3M). Even though the studio has committed to a theatrical window for its movies in 2022, note it wouldn’t be shocking if we see more of these adult-demo, potential Oscar bait movies pulling off some sort of truncated theatrical/HBO Max play in the future. Remember all those adult films that failed for Warners at the B.O. during the fall of 2019 (i.e. The Goldfinch, The Good Liar, Motherless Brooklyn) when Joker was excelling? If the studio had to do it all over again, odds are those would be HBO Max movies to respond to adult consumer tastes. Those Who Wish Me Dead received a B Cinemascore and a mediocre RT critics score of 62% fresh. I hear the Taylor Sheridan directed movie skewed male, with close to 90% over 25 and more than half over 35.

On the upside, Spiral‘s expected opening is higher than Wrath of Man‘s opening weekend of $8.3M, so it’s a sign that there’s some pulse at the domestic B.O. At the same time Spiral‘s underperformance is attributed to many factors, i.e. everything is finally reopening, especially here in California, as the pandemic clicks down; so people are distracted with proms, and school year-end activities. It’s not that moviegoing is facing stiff competition as we ramp back up, but people are only going to make time for only those movies they feel they can’t miss out on. As studios experiment with distribution models and severely collapsing windows, they may want to think about that: When you offer movies in theatres and in the home simultaneously, you make the product less than exclusive, significantly less than premium.

Compounding the above is the fact that the domestic exhibition infrastructure isn’t fully ablaze with only 66% of all U.S./Canada 5,88K movie theaters open with provinces in the Great White North like Ontario, Alberta and Manitoba still under lockdown. Canada which typically accounts for 7% to 10% of the weekend box office is only drawing 2% this weekend.

Factor into this that Spiral is not a four-quad movie, and is a complete reimagination of the Saw films as we know it. The response to that? B- CinemaScore, 40% on Rotten Tomatoes, and very low Comscore/Screen Engine PostTrak audience reactions of 63% in the top two boxes with a 43% recommend. Spiral drew 56% guys, 58% over 25 but with only 25% over 35 years old. Diversity demos were 35% Caucasian, 28% Black, 26% Hispanic, & 11% Asian/Other. Spiral played best on the East Coast.

Notable titles that had limited openings include Roadside Attractions’ YA movie Finding You which grossed an estimated $323K on Friday at 1,314 theaters and a 3-day of $910K. The Brian Baugh-directed and written title follows Finley, a talented aspiring violinist, who meets Beckett, a famous young movie star, on the way to her college semester abroad program in a small coastal village in Ireland. An unexpected romance emerges as the heartthrob Beckett leads the uptight Finley on an adventurous reawakening, and she emboldens him to take charge of his future, until the pressures of his stardom get in the way. RT critics score was at 69% fresh, with meh audience reaction of 71% positive and 46% recommend on PostTrak. Females were the most active ticket buyers here at 62% with 81% over 25 and 53% over 35 years old for this PG movie. Diversity demos were 70% Caucasian, 14% Hispanic, 6% Black, & 10% Asian/Other. The most amount of play here came from the Mid-West and South. A $693 per theater gross here.

Focus Features’ pick-up of Timur Bekmambetov’s thriller Profile which grossed $260K at 2,033 theaters for a weekend of $630K for a $310 per theater average.  Profile follows an undercover British journalist who infiltrates the online propaganda channels of the so-called Islamic State, only to be sucked in by her recruiter. The pic earned a B CinemaScore with lower PostTrak exits at 65% positive and a 37% recommend. Critics weren’t wowed at 59% Rotten. Audience make-up was guys at 54%, 79% over 25 with 40% over 35 years old. Diversity mix was 53% Caucasian, 21% Hispanic, 17% Black, & 9% Asian/Other. Most prominent markets were West and Southwest.

‘BTS: Yet To Come’ Sings Green On Screen – Specialty Box Office
DJ Khaled, Jay-Z, John Legend, and More Perform “God Did” at 2023 Grammys
Boris Johnson Says He Spends His Days Drawing Cows After Scandal Forced Him From Office
Knock at the Cabin Movie Clip – Andrew Pulls A Gun On Leonard (2023)
Grammys TV Review: Beyoncé Makes Winning History; Music’s Big Night Gets A Lot Of Its Beat Back With Hip Hop Celebrations & Mixtape Of A CBS Show