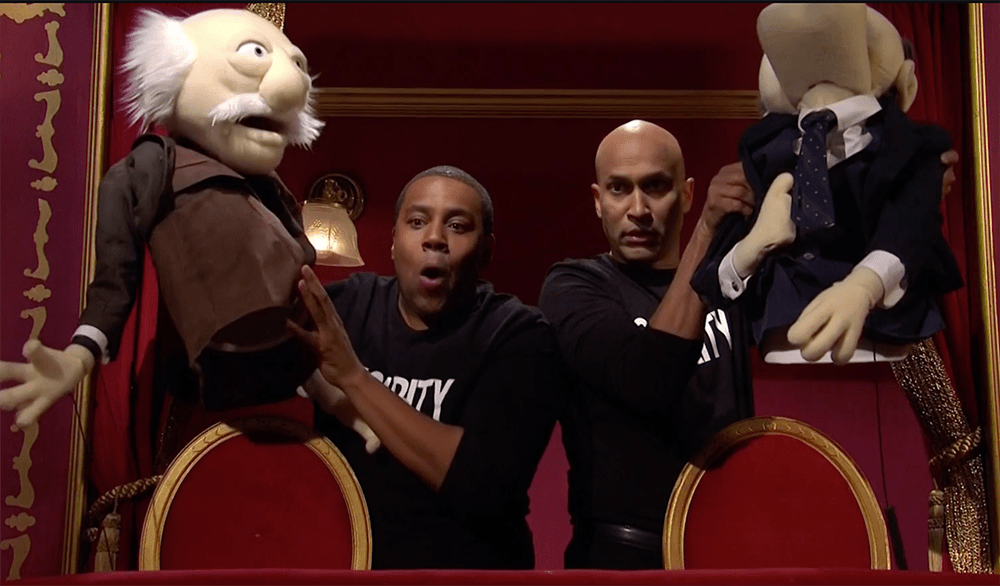 The worlds of Saturday Night Live and The Muppets collided as Kermit the Frog, Statler and Waldorf appeared at at Studio 8H for Keegan-Michael Key’s hosting debut.

In a spoof of The Muppets Show, Kermit welcomes Melissa Villaseñor’s Lily Tomlin, who’s passing by for a guest appearance. Heckling from their theater boxes were Statler and Waldorf, who set off security presence by joking about a bomb.

Breaking onto the scene are security guards played by Key and Kenan Thompson. Unsuccessful at silencing the puppet duo’s heckling, the two security guards tell them off.

“We don’t give a damn about the show, we work for the venue,” Key said. “Everybody paid good money to hear this little dragon and his friends do their thing. So please let them do their thing without talking.”

Naturally, Statler and Waldorf continue their negative comments, forcing Key to come up to them and beat the later black and blue. The two duos agree that neither of them are necessarily enjoying the show below, but the puppets’ complaining leads to more fighting.

Eventually Thompson and Key attempt to remove Statler and Waldorf from the venue, only to learn that they don’t have legs.

“Sorry, we didn’t know y’all were veterans,” Thompson apologized. “Thank you for your service.”

Finally, Key tries his hand at heckling from the box.

Watch The Muppets sketch below.

no hecklers. no exceptions pic.twitter.com/OzRxi7flfl