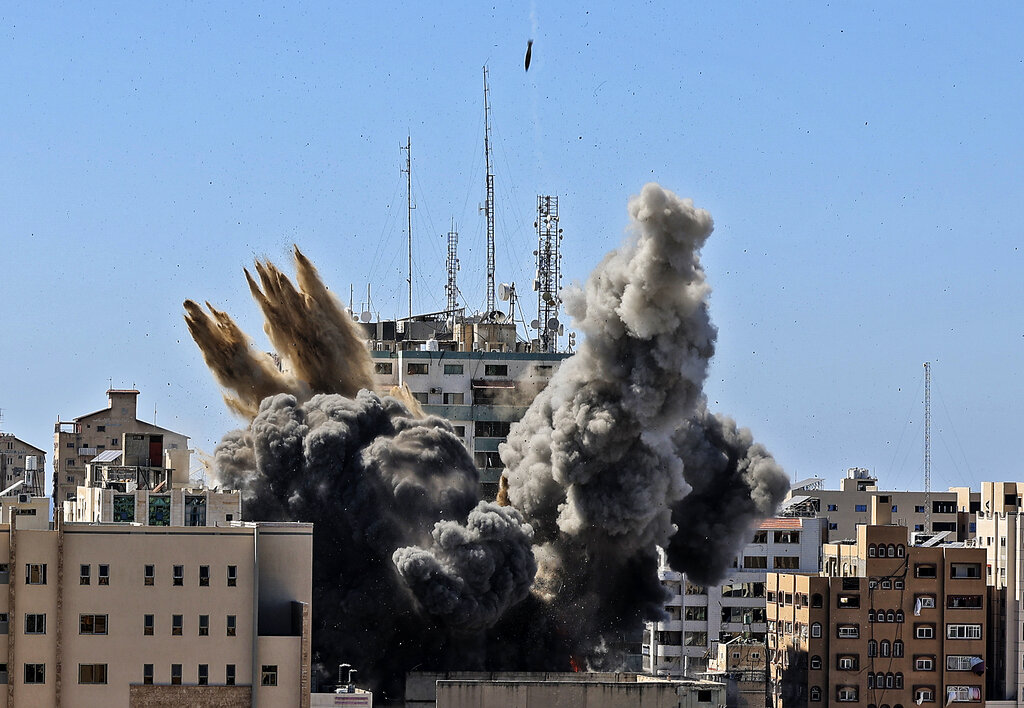 The dangers of covering the Israeli-Palestinian conflict have been ever apparent in multiple TV live shots during the past week, as network correspondents describe the tense situation against a backdrop of incoming missiles and falling shrapnel.

When NBC News’ Richard Engel went live on MSNBC from the outskirts of Ramallah on the West Bank on Tuesday, the scene was of chaos, with the sound of cracking in the air, demonstrators gathering and then scattering and then of what sounded like gunfire.

“You are always keeping your eyes open,” Engel told Stephanie Ruhle. “And the biggest thing you want to you want to be concerned about is live ammunition. That is what you really want to be afraid of.” Soon he put on a helmet, as he looked, cautiously, around him.

Fox News’ Trey Yingst has delivered a number of live reports showing Israel’s Iron Dome as it intercepted missiles from Gaza. In one instance last week, as the conflict erupted, he and the crew took cover as rockets rained down in the distance.

“The entire crew and I had to just dive under the car,” Yingst said on air, adding that they had to move “in a split second of time” because the rockets were being fired from all different angles and the Iron Dome did not intercept all of them.”

Yingst continued to report on the rocket fire and interceptions over Ashdod on Wednesday.

CNN’s Nic Robertson said via email that on Tuesday, they were driving down the road — once coming out of Ashdod and another driving past Ashkelon — “when suddenly the cars in front of us stopped and people were jumping out of their cars and literally lying on the side of the road, so that’s what we had to do.”

The situation has created new concerns for the Committee to Protect Journalists, which has put out a safety advisory. CPJ has documented at least eight cases of journalists being injured as they covered the protests and ensuing conflict. On Wednesday, CPJ condemned the killing of Yousef Abu Hussein, reporter and news anchor for the Hamas-affiliated radio station Voice of Al-Aqsa, who died when an Israeli warplane bombed the top floors of a Gaza City apartment building where he lived.

Over the weekend, Israeli forces conducted an air strike on a building in Gaza City that houses the Associated Press offices as well as those of other media outlets like Al-Jazeera. Israeli military claims that the building was being used by Hamas and was considered a military target, but AP President Gary Pruitt has called for an independent investigation. He said Monday that “we have no indication of a Hamas presence in the building, nor were we warned of any such possible presence before the airstrike.”

Correspondents at the border say that they are drawing on experience and common sense. Engel told Deadline via email that he stayed in the area with the crew for a couple of hours after the live shot.

“We pulled back, and then went back into the fray,” Engel said. “It is often like that in frontline areas. You move as the situation develops. The key is keeping your eyes open and being aware of things that can protect or hurt you — like stones than can provide cover or glass that can fall — and watch out when the live ammunition starts cracking.”

Yingst, in a phone interview from Israel, said that “basically my approach to this round of conflict has been to respond to where we can get to and where the news is happening.”

He added: “At this point, when we’re in southern Israel, no location is completely secure, but we’re doing everything we can to stay safe. Basically, as you have seen in our reports, sometimes it can be difficult. You have to make a decision about where you think is the safest spot and do the best job you can.”

He said that “this work can be very unpredictable. You have to be prepared for anything that is going to happen. And I think that not only when we are out here covering major fire, rockets and artillery and airstrikes, but also when we are covering demonstrations.” Yingst and the crew had been in Jerusalem covering street clashes between the Israeli police and the Palestinians, and “it’s the same approach. You have got to be prepared for anything to happen, and remember the number one priority is safety.”

He said that when covering protests that might break out into riots, the key is to remain vigilant, but “the first thing is to stay calm, because if I am not calm and I am not clear-headed, my crew may not be.” In one instance, police were firing stun grenades right next to where he crew was, and he interrupted a live shot to speak to the crew and made the decision to move away.

As the situation broke into deadly conflict last week, with rocket attacks by Palestinian militants and air strikes by Israel, correspondents have taken precautions, but “there are times when you just don’t expect incoming, and you just have to rush, grab what you can, get flat on the ground. Oftentimes you can’t see where it is coming from, so you have to sort of spot, ‘OK, this is headed our direction’” and assess if there is a big barrage, Yingst said. He cited one moment when they were next to an Iron Dome position and shrapnel was raining down, He dove under the car just before a live shot “and basically tried to get any cover I could get.”

He says another important factor in coverage is controlled breathing. “It’s funny, when I look back on live shots sometimes I’m focused my breath and I’m thinking, Where did I breathe during that shot?’” He watched a segment from Fox News Sunday with Chris Wallace, when Yingst was covering Israeli interception of missiles from Gaza. The crew had a nearby mound of dirt as cover, but Yingst said that he was happy with his breathing “because so often you are in the middle of it and there is incoming, and you have got a lot to think about. You’re talking to anchors and … you’ve got to be present but also aware.”

He added: “At the end of the day, everything changes and everything is unpredictable, so you just have to really be prepared to respond. What comes with that is mental clarity. That is the biggest thing to remember because if you allow the adrenaline to get to you and you start making quick, rash decisions, you are going to put yourself and your crew in danger, and I think that is the last thing we want.”

Robertson said that the Iron Dome interceptor system takes out a lot of incoming rockets, but there is still a risk that one will get by.

“When I was covering Sarajevo in Yugoslavia or Baghdad during the Gulf War and other places, we were living in the war,” he said. “There’s a risk here of rocket fire at any particular time — probably less than other more intense situations that I’ve been in but the dangers are there, so you have to take precautions.”

He said that when there is a perceived risk of incoming rockets at their location, they will put on their flak jackets and helmets, but that hasn’t happened as much so far compared with previous situations. They always have to body armor with them, and he keeps a dressing for a blast wound and a tourniquet in one of his trouser pockets, and a bag with first aid medical equipment in the car.

“All these things you’re thinking about all the time — where you can take cover, listening for the sound of sirens and the sounds of incoming rockets,” Robertson said. “You’re just switched on.”

Israel has closed the border crossing to Gaza, limiting media access to that side, while CPJ has been tracking other instances of media outlets struck in air strikes in Gaza City. CPJ also pointed to an air strike on another Gaza City building that housed media outlets.

“Israel must stop bombing the offices of news outlets and step up efforts to ensure that local and international journalists can work safely and freely,” said Ignacio Miguel Delgado, representative for the group in the Middle East and North Africa, said in a statement.

While the Gaza border crossing has been off limits, Robertson said that accredited journalists were being told that they could go there as of Wednesday if they signed a disclaimer, although that has not happened yet.

He said that he was surprised at the dramatic escalation of the situation, as well as the number and frequency of rockets that have been fired from Gaza.

“But it really shouldn’t be because Hamas and the other militant groups are obviously trying to find a way to beat the Israeli defense system to gain the upper hand in some ways,” Robertson said. “It’s a development over time.”

He said that the underlying tensions between Israeli Jews and Israeli Arabs also has been a surprise, but that situation has been simmering for some time.

“The past conflicts have just led to a polarization, and the deeper the polarization, that’s why it’s so hard to get any durable peace deal here.”