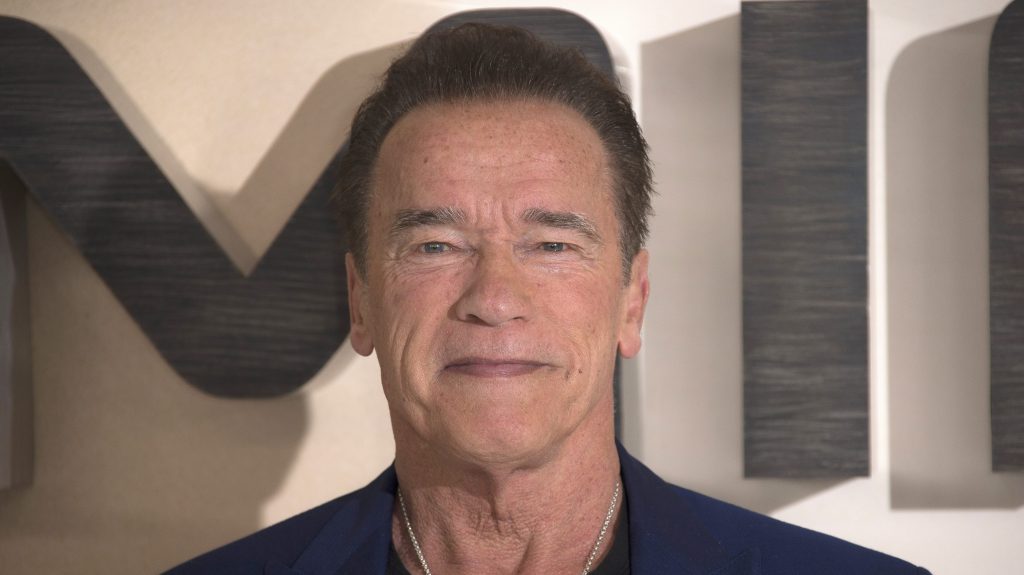 The former Governor of California and Terminator franchise star made a big splash today at The Big Screen Is Back conference to exclaim, “The big screen is back, ladies and gentleman!”. Arnold Schwarzenegger then led the whole auditorium at the AMC Century City 15 in a chant “We are back! We are back!“

Schwarzenegger said he got the call to speak today from NATO Chairman Rolando Rodriguez following the U.S. Capitol riot on Jan. 6.

“He said, ‘Arnold, do you sttill believe in free speech?,” said Schwarzenegger, “Good, because you’re going to give a speech on May 19 in Century City.”

“I wouldn’t be here if it wouldn’t be for theaters,” said the star of Predator and True Lies, “I always said to people, you can call me anything you want –Schnitzel, Arnie, Schwarzy,– but don’t ever call me a self-made man.” The star’s point being, he’d be nowhere if it weren’t for exhibition, the moviegoing industry’s infrastructure and the people who shelled out for tickets.

After detailing the path a film takes from production to testing, Schwarzenegger said, “you don’t have theaters, you don’t have nothing.”

“Yes, we’ve been in a pandemic year, and people had to watch movies on their little iPhones, little iPads…you had to put glasses on, they’re missing the special effects and visual effects on the big screen,” the star continued.

A big part of his speech emphasized the economic impact that movie theaters have in its 5,8K theaters and 40K screen reach. The star called out how it employs 153K of exhibition workers. “Look at how many jobs it creates!,” Schwarzenegger exclaimed,

“The gym business benefits, too,” he added.

We’ll tell you more about what went down at today’s rah-rah for cinema, but for the most part it was a revue of summer trailers and clips we’ve already seen from the major studios.  Warner Bros. showed off eight minutes of In the Heights’ electric opening, preceded by a heartfelt message from director Jon M. Chu about what theatrical meant to him, growing up and seeing movies like E.T. and Joy Luck Club with this family, followed by dim sum and deep discussion with his family. Among the fresh stuff we haven’t seen: Sony showed off clips for Escape Room: Tournament of Champions and Don’t Breathe 2; NEON showed off Nicolas Cage’s movie Pig about a truffle farmer whose pig gets stolen, and a brand new nonfiction feature The Year of the Everlasting Storm which tells seven stories during the global pandemic from seven directors including Laura Poitras, Anthony Chen, Jafar Panahi, Malik Vitthal, David Lowery, Dominga Sotomayor and Apichatpong Weerasethakul.

Schwarzenegger’s big speech today trumpeting exhibition was one of the few today from big personalities at the conference in addition to those from J.J. Abrams and Jason Blum. Other talent who made a cameo today included Maggie Q from Lionsgate’s The Protege, Zola director Janicza Bravo, The Night House director David Bruckner, and Werewolves Within star Sam Richardson.

Many of the executives who showed up today from the studios’ distribution and marketing ops were on hand to introduce clips, and welcome the big screen back. Of the standouts, Focus Distribution Boss Lisa Bunnell, who cried and got emotional over what the big screen meant to her in seeing a movie with an audience. “It’s important to have that human connection,” she said in remembering the time she went to see E.T.

“I’m proud to say that we released 12 movies during the pandemic. That’s no bull***, we weren’t throwing any movie in a theater, we went out and did real marketing campaigns and supported them,” said Bunnell. That’s the truth: the label’s release of Promising Young Woman earned five Oscar noms, including Best Picture, and one win for filmmaker Emerald Fennell’s original screenplay.

Ethan Titelman, EVP of Content at NRG, delivered some illuminating stats that U.S. moviegoers’ comfort with returning to theaters hit its highest point on Monday of 70%, besting 63% in April, 32% last May and 50% in September when Tenet was in theaters. Though overseas markets like Brazil and Germany are still closed, the globe’s comfort level stands at 55%. China is through the roof, and domestic’s envy at 95%, especially in the wake of Detective Chinatown 3 posting the biggest B.O. opening ever for a film with $398M.

In addition to making waves for the big screen today, Schwarzenegger made news today on the streaming side with news that he landed an eight-one hour-episode untitled global spy adventure series which he’ll star in and executive produce with Skydance TV.

Connie Britton Weighs in on a White Lotus Season 3 Return
Top 20 Most Shocking Moments In Video Games
It Cracks Anna Kendrick Up How Twilight Stars Went From Heartthrobs To ‘The Butt Of Every Joke’
Jeezy and Live Nation Not Responsible for Fatal 2014 Concert Shooting, Appellate Court Rules
Kylie Jenner Clarifies How to Pronounce Her Son Aire’s New Name