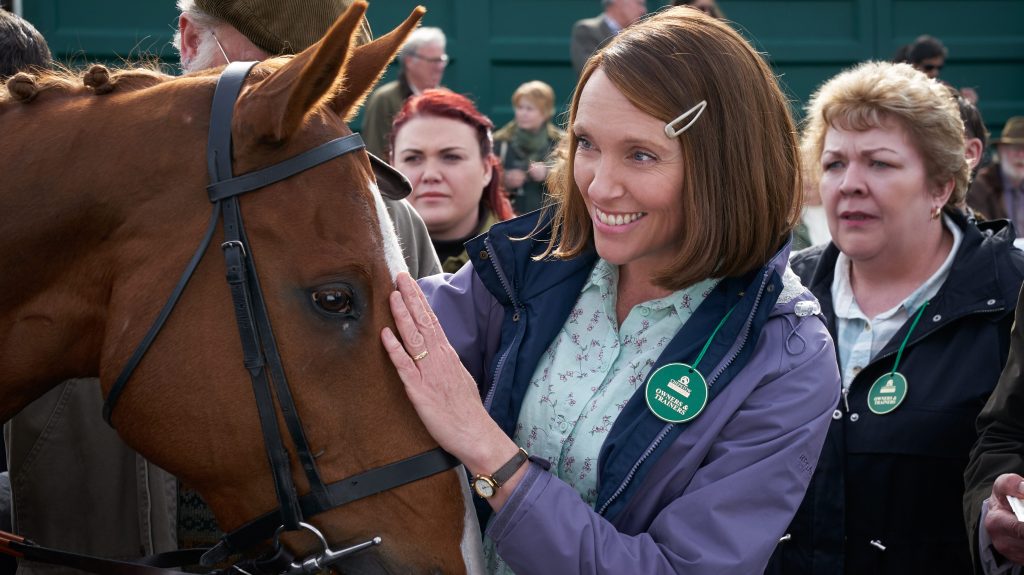 Directed by Euros Lyn, the film tells the true story of Dream Alliance, an unlikely race horse bred by small town Welsh bartender, Jan Vokes (Collette). With very little money and no experience, Jan convinces her neighbors to chip in their meager earnings to help raise Dream in the hopes he can compete with the racing elites. The group’s investment pays off as Dream rises through the ranks with grit and determination and goes on to race in the Welsh Grand National showing the heart of a true champion.

The film, which premiered at the 2020 Sundance Film Festival, gallops into limited theaters today followed by an on-demand release on June 11.

Eric Bana toplines The Dry, the indie crime drama which is being distributed by IFC Films. Directed by Robert Connolly, the pic has already made waves in Australia with almost $18 million in box office receipts. The film is based on the best-selling novel by Jane Haper. Genevieve O’reilly, Keir O’Donnell, John Polson, Sam Corlett, and Joe Klocek co-star.

In the movie, Federal Agent Aaron Falk (Bana) returns to his home town after an absence of over twenty years to attend the funeral of his childhood friend, Luke, who allegedly killed his wife and child before taking his own life – a victim of the madness that has ravaged this community after more than a decade of drought.

When Falk reluctantly agrees to stay and investigate the crime, he opens up an old wound – the death of 17-year-old Ellie Deacon. Falk begins to suspect these two crimes, separated by decades, are connected. As he struggles to prove not only Luke’s innocence but also his own, Falk finds himself pitted against the prejudice towards him and pent-up rage of a terrified community.

Director Esteban Arango tells an immigrant story in Blast Beat, which is being released by Vertical Entertainment in select theaters and on-demand.

The film, which had its premiere at this year’s Sundance, follows Colombian brothers Carly (Mateo Arias) and Mateo (Moises Arias) who, on the cusp of the year 2000, prepare to move to the United States for their last years of high school. Metalhead Carly has his heart set on attending the Georgia Aerospace Institute and working for NASA, while his supportive parents (Diane Guerrero and Wilmer Valderrama) seize the chance to escape the political turmoil in Colombia and chase the American Dream.

At first, Mateo is the only one to express any cynicism, but when the reality of their new life sinks in, the family struggles to adapt as their expectations are shattered. When events threaten to derail their future, Carly’s dream becomes his only lifeline.

Suki Waterhouse, Madisen Beaty, Ella-Rae Smith, Inanna Sarkis, Seamus Patterson, and Marina Stephenson-Kerr make up the cast of Seance, the indie horror film that is available in select theaters and on digital platforms from RLJE Films and Shudder.

Simon Barrett wrote the screenplay for Seance and also made his feature-length directorial debut. The pic centers on Camille Meadows (Waterhouse) who is the new girl at the prestigious Edelvine Academy for Girls. Soon after her arrival, six girls invite her to join them in a late-night ritual, calling forth the spirit of a dead former student who reportedly haunts their halls. But before morning, one of the girls is dead, leaving the others wondering what they may have awakened.

Shudder will premiere the film on its platform later in the year.

Filmed over a span of 10 years, the timely doc offers a portrait of the last living generation of everyday people to participate in Adolf Hitler’s Third Reich. The film raises questions about authority, conformity, complicity and perpetration, national identity, and responsibility, as men and women ranging from former SS members to civilians in never-before-seen interviews reckon with – in very different ways – their memories, perceptions, and personal appraisals of their own roles in the greatest human crimes in history.

The doc, which hails from Participant, made its premiere at the 2020 Venice Film Festival. Holland passed away on June 10 of last year at the age of 71.

Participant worked with USC Shoah Foundation, a global organization countering antisemitism and other forms of hatred through testimony, for educational resources on Final Account.

It’s the story of a Jewish family’s escape from 1933 Berlin to Europe and tackles prejudice, exile, displacement, and adaptation, as told from the perspective of the author’s alter ego, nine-year-old Anna Kemper (Riva Krymalowski in her feature film debut).

Anna is too busy with schoolwork and friends to notice Hitler’s face glaring from posters plastered all over 1933 Berlin. But when her father (Oliver Masucci) – based on the prominent theater critic Alfred Kerr – suddenly vanishes, the family is secretly hurried out of Germany. Anna begins to understand life will never be the same as she and her family navigate unfamiliar lands and cope with the challenges of being refugees.

Co-directors Matt Mercer and Mike Testin are mixing comedy and horror in Dementia: Part II, the indie film out in select theaters today from Dark Star Pictures and Bloody Disgusting.

Mercer also stars in the film as Wendell, who receives a threatening phone call from his parole officer Reggie (Graham Skipper) informing him that if he doesn’t find a job immediately, he will face serious legal repercussions. Wendell wrangles some home maintenance work for a seemingly benign older woman, Suzanne (Suzanne Voss), who persists in giving him increasingly absurd tasks to complete around the house.

As the workday progresses, Wendell is thrown into an ever-escalating nightmare and comes face to face with an unexpected evil. Suzanne hides a dark secret and it’s up to Wendell and Suzanne’s daughter, Sheila (Najarra Townsend) to put an end to her madness.

Following its theatrical run, the pic will be released on digital platforms on June 1.

The drama sees a high-society wedding interrupted by the arrival of unwelcome guests as protests rage on the streets.