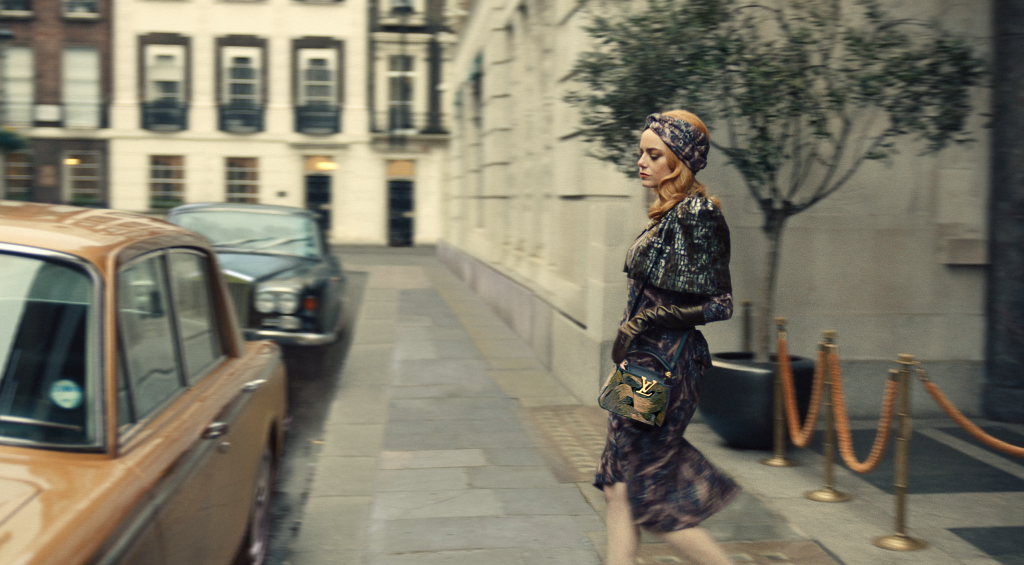 When it came to assembling the brand sponsors for Disney’s Cruella, it wasn’t about the dogs in the 101 Dalmatians live-action spinoff, or the swanky Panther De Ville car she drove in the 1990s Glenn Close movies, rather the glitz which the Emma Stone and Emma Thompson characters are all about.

While recent brand campaigns for Disney+’s season 2 of The Mandalorian and the hybrid theatrical release of Raya and the Last Dragon spoke mostly to home consumers, Cruella leans toward a female audience who wants to get out of the house for a stunning night on the town after a year-plus of lockdown. In addition, the Cruella promo partner campaign is arguably Disney’s most chic lineup of advertisers in recent years with high-end luxury names as Louis Vuitton, De Beers jewelry, Tom Davies eyewear and more.

All of this syncs with the pic’s sensibility: Cruella is the origin tale of the 101 Dalmatians villain, Cruella de Vil. The movie follows a young grifter named Estella (Stone) who is determined to make her mark in the 1970s London fashion-punk world. Her flair for fashion catches the eye of the Baroness von Hellman (Thompson). However, their relationship sets in motion a course of events and revelations that will cause Estella to embrace her wicked side and become the raucous, fashionable and revenge-bent Cruella.

Cruella opened in previews last night ahead of the Memorial Day weekend, earning $1.4M. Low-end estimates see the pic earning $17M in theaters, with a potential to hit mid $20Ms over four days. The movie is available to Disney+ subscribers for the extra price of $29.99, a decision the studio made given how most of the world’s exhibition infrastructure hasn’t fully returned just yet.

Interestingly enough, despite the pic’s fashion angle, there weren’t any clothing labels as promo partners or possessing product placement. This was so that the production’s costume department led by designer Jenny Beaven had the liberty to create a unique 1970s sensibility, highlighted by Cruella’s black, white and red palette, without the boundaries of fashion labels. Cruella’s closet, which included 47 looks for Stone, includes little jackets and hip accessories of the era.

The one brand fashion piece which Stone carries in the film is a Louis Vuitton Capucines bag.

“It does add a touch of class to this woman that she may not have previously had,” says Stone in the content spot which LV created for the film (below). It was a great pairing given how the actress is an ambassador for Louis Vuitton, in fact, they were the pic’s world premiere sponsor. The Oscar-winning actress wore an LV black suit to the Los Angeles premiere of the film, and she is known to also adore the designer’s pear-Egyptian jasmine infused fragrance Cœur Battant. Stone expressed in Vogue how she uses fragrance to get into character.

Also leaning into the film’s couture tone, Disney teamed with Singer, which created a co-branded TV commercial featuring a sewing machine used in the Craig Gillespie directed movie. Singer’s part of the marketing included retail activations and a weekly sweepstakes for a 6800C Heavy Duty machine. Need some material to go into that sewing machine so you can look like Cruella? Well then head over to Joann Fabrics which is selling a number of licensed prints from the movie.

It’s the first time that De Beers has partnered on a Disney movie, and the jewelry maker provided a number of wares for the production, particularly worn by Baroness Von Hellman. These pieces include the five-line necklace and three-line earrings in white gold from the Arpeggia collection, inspired by Beethoven’s Moonlight Sonata. The collection features round brilliant-cut diamonds on cascading lines, like musical notes. There’s also the Diamond Legends by De Beers Cupid necklace, which consists of two symmetrical lines of princess-cut diamonds which make-up the piece, outlined by a row of marquise-shaped stones. The De Beers component of the campaign features a custom spot for the US and UK markets and social media.

When it came to an eyewear partner for Cruella, Disney selected Tom Davies.

“The movie takes place in the ‘70s and a lot of people wore glasses then,” says the studio’s SVP of Global Marketing Partnerships & Promotions Lylle Breier, “Tom Davies is a brilliant British designer who brought the perfect high fashion cool vibe.”

Davies hand-crafted the custom frames according to the physical characteristics of the actresses, in total designing 120 glasses as Estella transforms into Cruella. Davies drew inspiration from the screenplay, as well as 1970s photos he found of shoppers in the Liberty Department store, to create retro cat specs and Von Hellman’s epic sunglasses. As Thompson’s character becomes more nervous throughout the film, her glasses become more erratic.  The Tom Davies Cruella campaign spanned U.S., Canada, and UK with a custom spot, social reach and a design competition and influencers program.

Cosmetics advertisers included MAC, which Disney worked with during Maleficent and Aladdin, as well as Sally Hansen nail polish. MAC products were used during the production with the cosmetics team visiting makeup artist Nadia Stacey before creating their line. In total, MAC captured over 30 looks for Stone, including punk rock reds and metallic tones. The Cruella collection is available in North America and 80 countries with a retail display instore for the film, paid and owned social media, and a custom spot. The MAC Cruella line includes matte lipstick (colors Sweet-N-Vicious light pink and De Vil in the Details bright red); liquid lipcolor in Glamarchy blood red; De-Vinyl black eyeliner and Cruella to Be Kind eyeshadow in colors including De Villionaire silver frost; Crue Love vivid blue-red frost and Sinister Shimmer black with gold sparkle frost.

Sally Hansen was a new feature partner for Disney and touted a 13 Gel Shade collection with nail colors such as Get Mod, Red Eye, The DeVil Is In The Details, Onyx-pected, Iconic Darling!, TuTu The Ballet, Greyfitti, Luck & Glory, Fame & Fortune, Pretty In Punk, Tipsy Gypsy, No To Conformity, and Tidal Wave. The campaign includes in store displays at Rite-Aid, Target, CVS, Walmart, and Meijer.

But if you’re going to get all dolled up, you’ll need a mirror to see what you look like. That’s where Kohler stepped in, and, no, they did not provide sink faucets and handles for Cruella‘s production design. It was really all about the black makeup mirror we see in the film. Kohler’s campaign, which consists of a custom spot, will run in the U.S. and China.

Disney partnered with on-demand fitness platform obé for Raya and the Last Dragon, and they’re working again together. obé has two-themed classes with music from the Cruella soundtrack. Those classes will be offered over the 4-day holiday weekend. The push includes a co-branded spot, digital, social and email blasts. Look out for instructor Peter Tucci who’ll be donning a Cruella get-up, including wig, as he leads a sculpted dance cardio session. For the bold, there’s a class with 101 burpees.

“The world is opening up and people are feeling more hopeful, and Cruella is the absolute perfect movie for that,” says Breier about curating Cruella‘s brand partners, “People want to get dressed up and make an big event out of this movie. Whether they go to a movie theatre or watch it on Disney+, they want to do it in style, and make it special.”