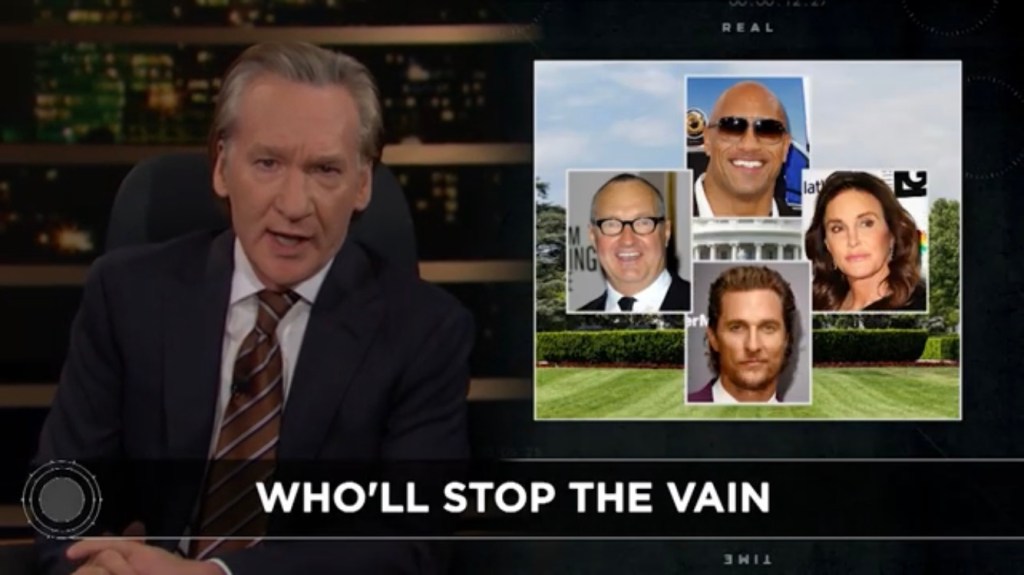 Bill Maher unloaded on celebrity candidates for high political office as a “recurring nightmare that we just can’t shake.”

In his show-ending “New Rule,” he singled out Dwayne “The Rock” Johnson, Caitlyn Jenner, Matthew McConaughey and Randy Quaid. All have expressed varying levels of interest in running for either governor of California or Texas or becoming president of the United States. All have exactly what it takes to run the country, Maher sneered — “malignant narcissism.”

The host wondered: “Did we all not just witness the cautionary tale known as Donald Trump? The last four years was a warning, not an inspiration. You were supposed to see that and think, ‘I guess high-level political jobs ought to go to people who’ve trained for it and know what they’re doing.’”

Maher went one by one through the quartet of hopefuls, saying they all were likely “nice” and “good” people — well, except perhaps for Quaid, who resembles “Guy Rooting Through Your Recycling Bin.” Jenner, he said, brings qualifications including being “a background character in a reality show not about her.”

“When did governing become the safety school for when the guest spots on Chicago Fire dry up?” Maher asked. “We treat government like the lowest rung of celebrity,” below even magicians.

“Perhaps you’ve noticed that things have been a little different in America these last five months,” he said. “That’s because we have people back in charge who spent their formative years not on a soundstage but studying the stuff you need to know to be effective on the world stage.”

It isn’t that Johnson, Jenner, McConaughey and Quaid are actors, Maher added. “It’s that they’re not professionals” in politics. “This guy,” he continued, as a photo of Barack Obama flashed on screen, “was a rock star because he was good in his field, government. That’s not you.”

You can’t pick up governing “on the fly and you can’t fix it in post. Putin’s not on a green screen and he doesn’t give a sh-t about your million-dollar smile.”

No one has to tell President Joe Biden what’s in the Constitution, Maher cracked — “he was in the room where it was written.”

Dismissing Johnson’s claim that he could unite the country as president, the host said, quoting a line from Saturday Night Live popularized by his friend, Al Franken, “Let me put it bluntly to you and all the other showbiz candidates. You’re not good enough, you’re not smart enough, and doggone it, it completely doesn’t matter that people like you. They like you now because you’re an entertainer and, thus, largely uncontroversial. Governing is the opposite.”