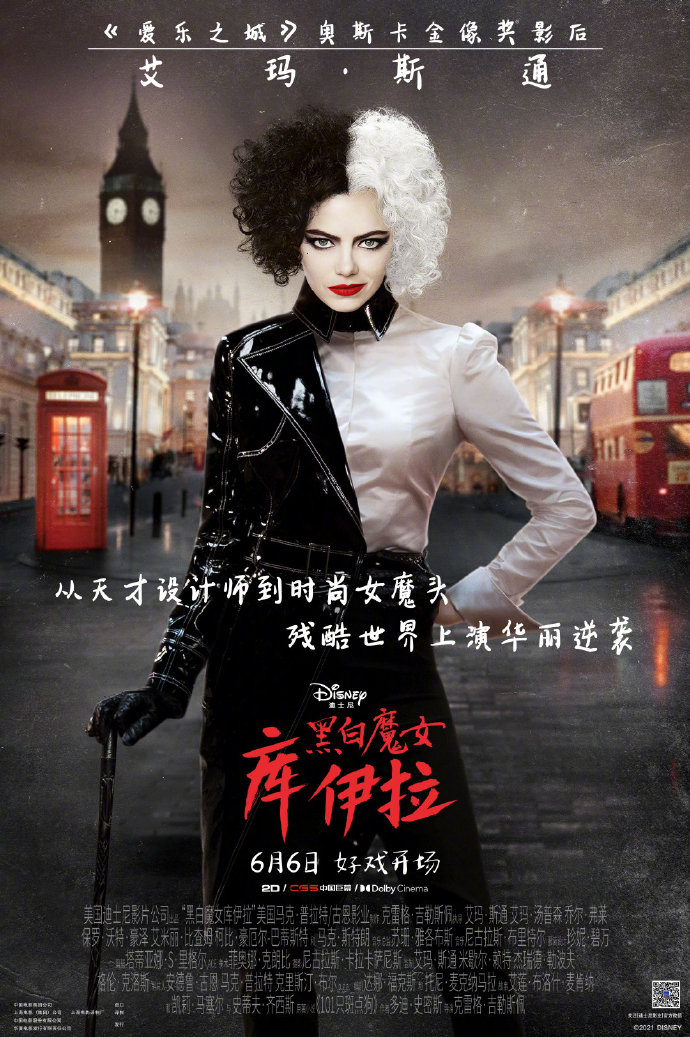 Disney’s Cruella has received a June 6 release date in China, which will see it start on a non-traditional Sunday next week. This is the latest Hollywood title to be confirmed by the Middle Kingdom with a shortened lead-time versus the usual 30-day advance. The Emma Stone-starrer began domestic and international box office rollout this week and while it had earlier been approved for China, a date had yet to be set. The official Disney Weibo account posted an update late today local time.

Despite hitting China on a Sunday, that the release is fairly close to the majority of overseas as well as domestic dates could be a positive — ie versus potential piracy and in the hope that social and critical sentiment from elsewhere flows into the market (Cruella is currently at 72% fresh on Rotten Tomatoes with a 95% audience score and took $1.4M in domestic previews on Thursday; in Korea, Cruella has grossed an estimated $821K through today). The June 6 Middle Kingdom date is about three weeks ahead of the 100th anniversary of the founding of the Communist Party which is expected to lead to a blackout on imports.

China, currently led by Universal’s F9 at an estimated RMB 1.09B ($171M) through today, has recently added a handful of Hollywood titles with varying degrees of lead-time. That includes this weekend’s A Quiet Place Part II, which received a late-breaking date earlier this week and grossed an estimated RMB 25.6M ($4M) on day one today; strong given it was only confirmed a few days ago. Also due up in June are Columbia Pictures’ Peter Rabbit 2: The Runaway on June 11 and Sony Pictures Classics’ The Father on June 18.

The Craig Gillespie-directed Cruella, an origins story of the 101 Dalmatians villain, started its offshore tour Wednesday in Italy, Switzerland and Indonesia and added the UK, Spain, Australia, Japan, Korea, Brazil and Mexico through today. In total, covering about 60% of the international footprint, the film is also playing on Disney+ for an additional fee in those territories where the service is available. For our global weekend preview, as well as a look at what the rest of the summer has in store, click here.