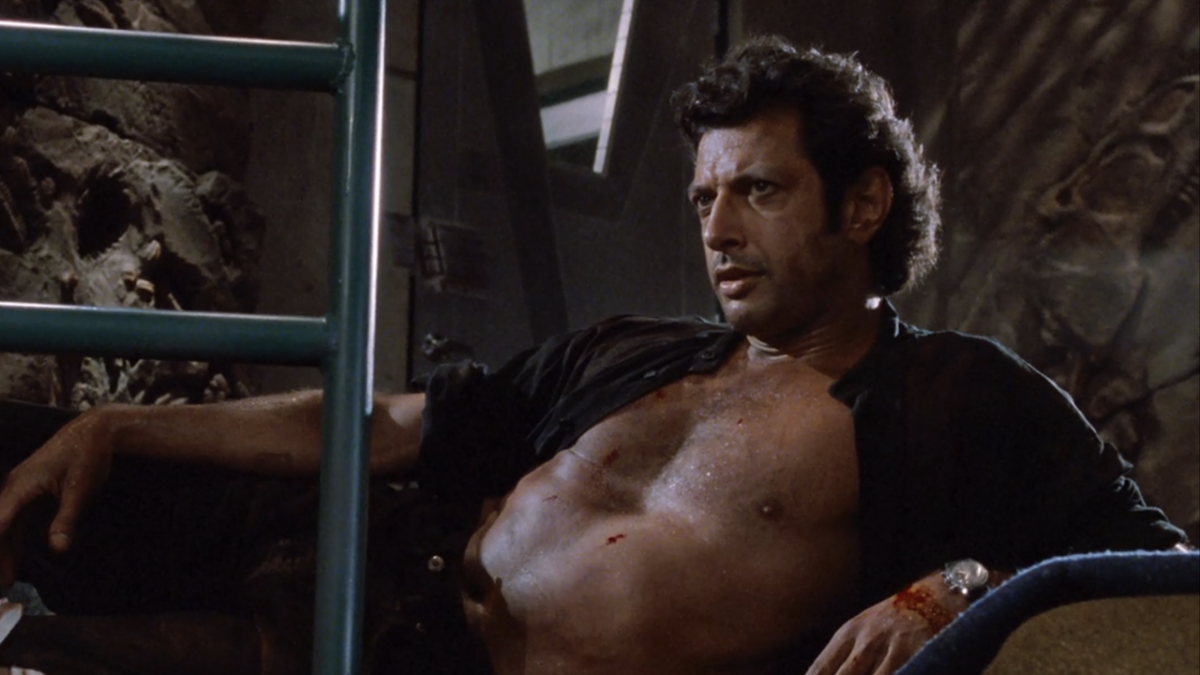 Jurassic Park, Steven Spielberg’s 1993 dinosaur tale, is littered with iconic moments. There’s the first meeting between John Hammond, Ellie Sattler, and Alan Grant, the initial appearance of the Tyrannosaurus rex and the showdown with the raptors in the kitchen. But amid the amazing action and impeccable quotes, there’s one element that truly stands out: Jeff Goldblum’s infamous shirtless scene. It’s essentially the stuff of legend at this point as, even today, fans can’t get enough of it. With Goldblum now doing press for Jurassic World: Dominion, the star has been discussing it, and his latest explanation for it is so on brand.

Jeff Goldblum’s Dr. Ian Malcolm first appears with his shirt unbuttoned during the film’s second act. The actual scene sees him, now injured due to the T-Rex, conversing with John Hammond, Ellie Sattler, and others about how to undo the security snafu created by Dennis Nedry. Though the sequence is interesting on its own, many would argue that Malcolm’s exposed physique adds something to it. According to Goldblum, the moment just happened naturally:

I think it’s safe to say that moviegoers don’t really mind that the shirt became unbuttoned. In the past, the beloved actor has provided some funny responses to his major on-screen moment, even going as far as to apologize for it. However, what he went on to reveal to Vanity Fair about it is sure to have fans laughing even more:

Well, that’s one way to refer to it… I guess? I’m as to who came up with that particular name for it, especially since I can’t really see Steven Spielberg coming up with such an awkward (and oddly sensual) designation. Regardless of what you call it though, the shot is still the same, and it’s going to live with the history of cinema for decades to come.

The scene has really worked its way into pop culture in some interesting ways. As a matter of fact, in 2018, a giant statue of Jeff Goldblum’s shirtless character was erected in London. The actor himself shared thoughts on the structure around that time and deemed it “lovely.” Goldblum even recreated the iconic shot last year, much to the delight of his social media followers.

With Jeff Goldblum set to return in Jurassic World: Dominion, folks may be wondering if they can expect a callback of sorts. It would be fitting since the movie is set to serve as the culmination of the franchise up to this point. We’ll just have to wait and see if director Colin Trevorrow delivers such a thing. In the meantime, I’m down to hear more of Goldblum’s thoughts on his highly analyzed movie moment.

Jurassic World: Dominion, one of 2022’s biggest upcoming movies, hits theaters on June 10. While you wait for it to release, you can revisit the shirtless scene by streaming Jurassic Park with an HBO Max subscription.