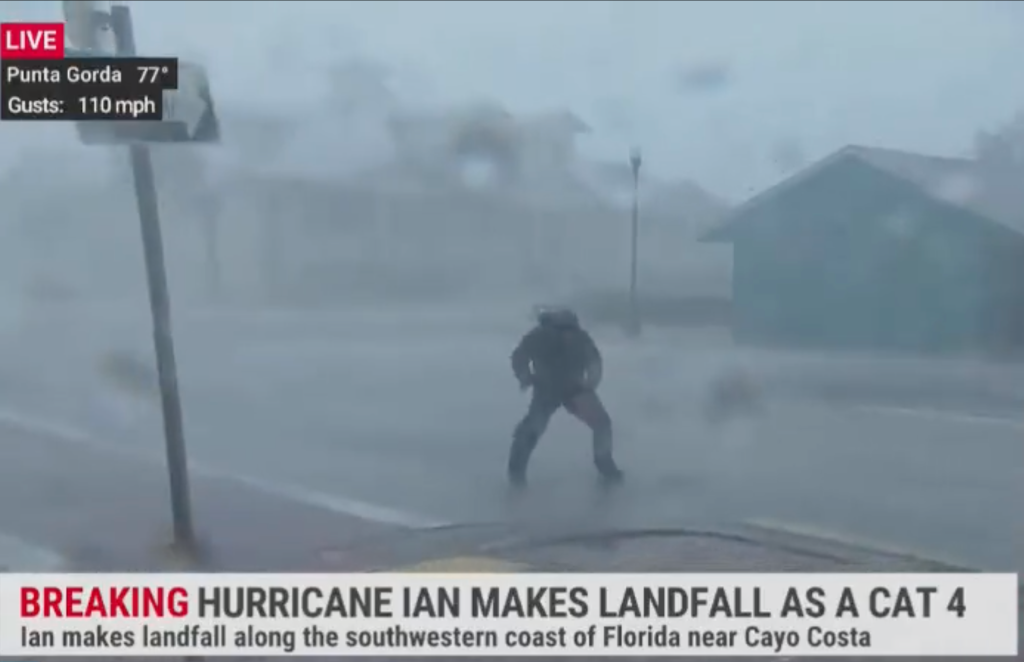 Category 4 Hurricane Ian made landfall this afternoon near Fort Meyers, Florida with maximum sustained winds of 150 mph. In doing so, it became the fifth-largest storm to hit the U.S. mainland — at least in recorded history — and the Weather Channel was there to cover it.

Meteorologist Jim Cantore was at ground zero to document the storm’s arrival, an assignment that is not without its risks.

Cantore was doing a live man-on-the-street report in sustained 61 mph winds — with gusts to 110 mph — when he was blown backward as a tree branch shot across the street, hit him in the leg and knocked him over.

The footage also gives a sense of just how hard Cantore has to struggle to remain in place — much less upright — further evidence of which is the street sign blown down behind him as he grabs onto another for balance.

You can see the video below.

Jim Cantore literally hit by a flying tree branch during a live report. Please get this man off the street. pic.twitter.com/D6UOizGArc

In what seems to be a later clip, Cantore has taken refuge on a building balcony saying,”We have come up her for safety from the surge…and where we were earlier, it looks like there’s three or four feet of water. Waves crashing over the area from earlier this morning.”

He continues, “This is one of the worst hurricanes I have ever been in. It may be the worst in terms of covering over 25 years and 90 storms.

“It looks like a North Atlantic Ocean storm here in Fort Meyers,” the meteorologist says looking out over the rising muddy waters and waves breaking closer and closer to the balcony. “The ocean, the river and the gulf has taken over everything.”

We’re officially in the thick of things.

Our coverage of #Ian continues on The Weather Channel. @mikeseidel gives an update from Fort Myers, Florida: pic.twitter.com/8PKjGLBKZz

*RARE* first person view of storm surge. This camera is 6 feet off the ground on Estero Blvd in Fort Myers Beach, FL. Not sure how much longer it keeps working. You’ll see it live only on ⁦@weatherchannel⁩ #Ian pic.twitter.com/WwHtvgVxjY

Emma Corrin Calls For Gender-Neutral Awards: “I Hope For A Future In Which That Happens”
Jennifer Lopez Shares Sweet Pics From Her And Ben Affleck’s First Thanksgiving As A Married Couple
Lindsey Buckingham Remembers Christine McVie: “I Feel Very Lucky to Have Known Her”
Lucasfilm’s Kathleen Kennedy Gives A Reason Why Indiana Jones And The Kingdom Of The Crystal Skull Wasn’t As Beloved
White Noise Trailer #1 (2022)